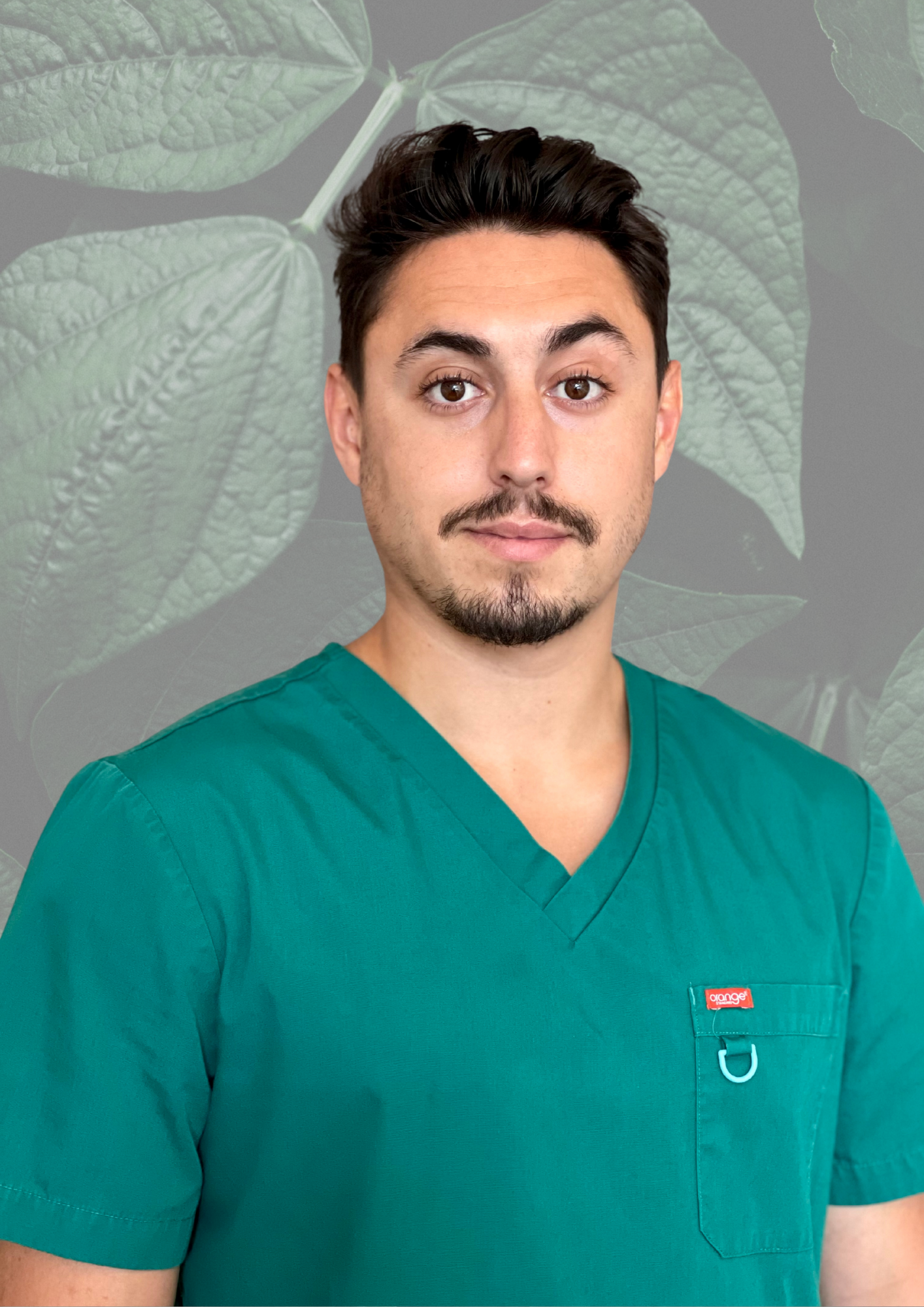 Thoracic and rib pain…we will call this patient Tim,

Tim came to the clinic with a lot of pain and uncertainties about whether I would be able to help. Tim was struggling for 8 years, to sleep at least 4 hours per night. Also, was experiencing very severe episodes of constant back pain for a number of years. They were working up to 16 hours a day without any breaks. Tim could not practice any sport or activity as he was lacking time and energy. Also, their stress levels were very high which was not helping them with the pain management. Practically, the worst pain he was experiencing was rib pain going from the mid to the front.

The medical term for inflammation of the cartilage that joins your ribs to your breastbone (sternum) is Costochondritis.  Cartilage is tough but flexible connective tissue found throughout the body, including in the joints between bones. It acts as a shock absorber, cushioning the joints.

The area of cartilage joining your ribs to your breastbone is known as the costochondral joint.

Costochondritis can sometimes be confused with a separate condition called Tietze’s syndrome, as it also involves inflammation of the costochondral joint and can cause very similar symptoms.

However, Tietze’s syndrome is much less common than costochondritis, and it tends to cause chest swelling in addition to the other symptoms, whereas costochondritis does not.

The rest of this topic focuses on costochondritis but, as the conditions are very similar, most of the information also applies to Tietze’s syndrome.

In the third trimester of pregnancy (for some women a little earlier) you may experience sore or painful ribs, which can range from mild discomfort to extremely sore. The pain and soreness is caused by pressure from the top of your growing uterus, as well as baby kicking or punching the area. Sore ribs are usually on the side of the baby’s position and can be felt just below the breasts. You’ll probably find that your ribs are more painful when sitting, moreso when leaning forward.

The fundus (the top of your uterus) is at it’s highest at around 36 weeks of pregnancy (reaching just below the breastbone), then baby drops into your pelvic cavity in preparation for birth. This usually provides some much appreciated relief! But until then, the discomfort usually continues.

We helped Dave, a 20 year old mechanic with rib cage pain.  Dave complained about stabbing pains in his chest.  After ruling out any lung or heart disease, his case history revealed that a recurrent winter chest infection and constantly heavy lifting had conspired to restrict the joints in his upper back and strain the muscles and ligaments in his ribcage.  Dave had significant improvement after 3 treatments aimed at mobilizing his neck, upper back, and ribcage.  He was given an exercises program and advice regarding lifting.

When the costochondral joint becomes inflamed, it can result in sharp chest pain and tenderness.

The pain may be made worse by:

These symptoms can develop gradually or start suddenly.

Health in Motion Osteopaths
4.9
Based on 34 reviews

Sally Spencer
10:24 18 May 20
I had a new appointment booked here at the beginning of lockdown. Of course... this had to be postponed but Lola suggested, as my problem was with my arm, she may be able to help through using video calls.I agreed to meeting on video calls and I have to say that over the past 7 weeks it has been really great and I feel that she has really helped me. It has been really convenient, not having to travel and appointments have been really easy to access. The video call system is very easy to use (we're all used to it now!) and the picture and audio are really clear.Lola has been really keen to ensure that she sees me clearly when I tried out exercises and the exercise plan was always clear with diagrams, clear explanation and a link in order to see the exercise done properly on YouTube.All in all it has been a great experience having socially distanced appointments and has been great not to have to wait until July or later to have an appointment. I've not had to wait for my arm to improve and also to learn the strategies and strengthening exercises in order to ensure that I don't strain it in the same way again. Of course, it will always be better to see an Osteopath in person but I think that this alternative has been really worthwhile and useful and I would highly recommend Lola and her team for the work they do and commend her for considering how she can help her clients, at a time when face to face appointments have been impossible. Thank you Health in Motion!read more

Claire Meadows
15:09 04 May 20
Lola is compassionate and very thorough. She was able to diagnose my lower back... trouble via videoconferencing, and gave me a plan to relieve my pain and back spasms. She went through the exercises with me one by one so I really understood how to do them properly. A welcome relief! Would definitely recommend.read more

Helly R
20:23 27 Apr 20
I contacted Health in Motion regarding my child and was promptly offered a... telephone triage and then video consultation (due to current social distancing measures). I was fortunate to have met Lola who clearly outlined the process, information and tasks required for her to make an assessment. Lola took the time to provide a clear rationale behind the questions asked; this was particularly helpful being new to the process. We left with a greater understanding and clear recommendations which we considered helpful!read more

Mark O’Sullivan
17:35 27 Apr 20
A brilliant and friendly clinic which I have used over the past few years, what... ever the problem may be. Lola has been excellent with the video calls after I suffered a serious back problem recently during lock down, and has helped me get back on track with great advice, exercises and stretches.read more

George Raymond
14:41 27 Apr 20
Thank you for the video consultations. I had a knee pain from running. I am... able to run again after 3 video sessions. Excellent job.read more

Shelagh Gregson
12:38 09 Mar 20
I was lucky that Eds was able to see me when I had a neck problem while away... from home. I found the clinic beautiful, relaxing and impeccably clean and Eds was professional, knowledgeable and friendly. I know now who to go to if I have a similar problem. Thank you very much Eds.read more

Lynne Babbington
15:40 23 Jan 20
Thanks to Lola, Health in Motion, for relevant treatment and suggested... exercises I am feeling a lot better. Would not hesitate to recommend this practice.read more

vahe saboonchian
12:07 01 Jan 20
Very experienced team of osteopaths. I went to them with a diagnosis from a... local hospital which said I had soft tissue damage. Health in Motion Osteopaths were not happy with that diagnosis and advised me to have an MRI done since they suspected it was a ruptured quadricep tendon. It turned out that it WAS, and a week later I had surgery to repair and reattach the tendon.read more

Jo Dover
10:20 17 Dec 19
Excellent session with Eds, he was thorough and able to spot the issues I had,... work on them in the session and gave me exercises to undertake afterwards. Very professional and has really helped to ease the injury. Thank you.read more

Marie Wilson
13:26 22 Oct 19
I found them most helpful . My symptoms have decreased. They have been gentle... ,courteous, kind& professional. I would recommend them to any one who has back & joint problems.read more

Peter Henfield
20:39 07 Oct 19
Great service from Eds at Health in Motion. Homed in on the source of my back... trouble and gave great advice regarding effective exercises. There was no pressure to make a follow up appointment just see how you get on and come back if you need to. Highly recommended- Thanks very muchread more

ali mohammed
12:44 07 Oct 19
I was given an Excellent professional qualified advise and guidance with actual... debatable reasonings.I strongly recommend people with any pain not to deprive themselves in not visiting this clinic.read more

Laurence Mckidd
11:18 30 Sep 19
I have been attending Health in Motion for some months with different injuries.... First tennis elbow then a pain in my knee.. He has solved the problem with my elbow and is helping me get back to fitness as regards my knee. I have found Eds very knowledgeable in the mechanics of the human body. Excellent/professional service. Regards Laurence Mckiddread more

Fiona Kennedy
15:35 23 Sep 19
Very professional service. When I went to see Lola I could hardly move my leg... in any direction without severe pain and in a matter of days I was pain-free. Really impressed and grateful.read more

Tina Lorenzo
10:22 12 Sep 19
Did my back in after bending, and was in extreme pain and almost unable to... move. Called health in Motion who saw me the same day and again the following week. Sorted me out straight away. Supposed to go for a third session but have been ill (something entirely unrelated) so not been back for third session yet. Excellent service and treatment. Would not hesitate to use them again or refer anyone looking for an osteopath. Thank you so very much.read more

Matt
09:23 12 Jun 19
I came to see Lola at Health in Motion 3 months before the otillo swim run... event I was entered into. Having had a knee op last October I was particular concerned about being able to complete the event without pain and long term damage. I also live with extremely tight hams and calf muscles, so lots to fix.Lola and the team listened to my needs and with a combination of treatment and exercise/rehab plans got me to the start line ready to compete. I was particularly impressed with how I was advised to go back to very light exercise and stretching initially, do not rush into the longer distance prep etc. I cannot stress how amazing this pre and post activity routine improved my training.The event was last Sunday and was a success. 29km of trail running and 9k of open water swimming around the Isles of Scilly. I feel fine now. This is down so much to the treatment and preparation plan prepared by Health in Motion. Thank you!!!read more

Julie Gooding
14:19 11 Jun 19
Have used Health in Motion various times and they never fail to put me right.... Eds Chester takes the time to really work out the root cause to prevent re-injury as well as dealing effectively with the initial pain. Highly recommend.read more

Michael Gordon-Rawlings
16:56 10 Jun 19
Very happy with Health In Motion Osteopaths. They take great care of their... patients and explain everything clearly. Working our way through my various problems.read more
Next Reviews

OPEN 6 DAYS PER WEEK
WE ARE OPEN FOR FACE TO FACE APPOINTMENTS. Click here to find out how we keep you safe during your visit. To book call 02089915280.
X